PUNE: A fire broke out at former deputy chief minister Ajit Pawar’s farmhouse in Mulshi taluka around 7.45pm on Sunday. The farmhouse is located along Ghotawade-Mulkhed Road in Mulshi, about 21km from the Pune. The fire broke out due to a short circuit, initial investigations revealed. 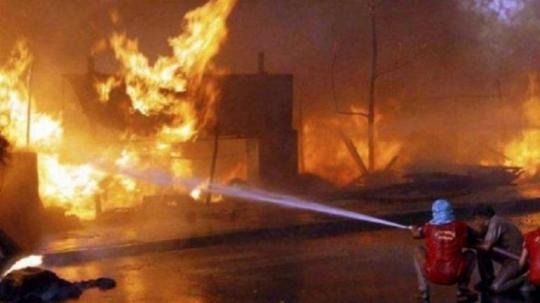 Two fire tenders from the Hinjewadi fire station of the Pune Metropolitan Region Development Authority (PMRDA) were sent to the farmhouse. The firemen doused the blaze in about an hour. No casualty was reported. When contacted, Pawar told TOI that a small canopy-like structure near the main farmhouse structure was damaged in the fire. “It was a small fibre structure near the main farmhouse that was damaged in the fire. The fire broke out due to a short circuit. The main structure of the farmhouse was not damaged,” Pawar said. “Strong winds were blowing when the fire broke out. It was also raining. The fire augmented because of the strong winds and went out of control,” he added.

An official from the PMRDA confirmed that prima facie investigations revealed the cause of the fire. “The fire was caused due to a short circuit. A caretaker and security personnel were at the farmhouse. No one sustained injuries,” the officer said. The PMRDA officer added that the fire brigade received a call around 7.45pm on Sunday. “We sent two fire tenders to the spot. They doused the fire in an hour,” the officer said. Pawar’s farmhouse is located about a kilometre away from Mulkhed village, along the banks of the Mula River. A resident of Mulkhed said villagers could see the flames and smoke emanating from the farmhouse.