A massive fire erupted on early Sunday morning in Kolkata’s Bagri market. The market is situated in the congested Burrabazar area in central Kolkata.

The fire broke out at a building housing shops in the market at around 2.30 am, sources said. Around 30 fire tenders were rushed to the spot and no immediate casualty has been reported. A ladder has been brought to reach the top of the five-storied building, sources said.

Kolkata Mayor Sovan Chatterjee visited the market in Canning Street in the early hours, he said, “The fire broke out at 2:45 am. We are trying our best but firefighting operation is tough here because of the number of buildings. No injuries have been reported so far.” 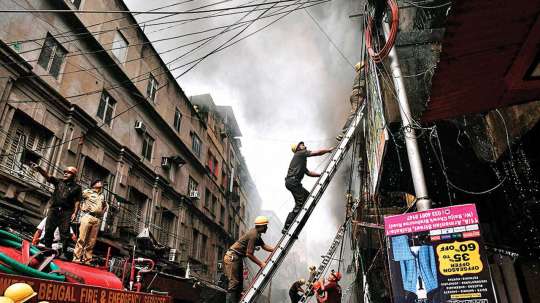 According to reports, fire fighters are still trying to contain the massive fire as police and disaster management groups have also been pressed into action.  Fire Brigade Director General and senior police officers too reached the spot.

Traffic police have also put restrictions in and around Canning Street. The cause of the fire is yet to be ascertained. Further details are awaited.

Fire breaks out at cinema hall in Visakhapatnam, no casualties reported (17.09.2018)

Gujarat: Fire breaks out in tyre godown at Shreeji Tower in Ahmedabad (17.09.18)