Mumbai city ranked second in fires caused due to short circuit, with 418 deaths over 10 years, according to National Crime Records Bureau (NCRB) data. Delhi recorded the most short circuit-related fatalities (424), while Ahmedabad came third with 260 casualties in 2006-15. Short circuit is a leading cause of fires. Maharashtra, with 1,406 deaths, came third after Andhra Pradesh and Gujarat in that period.

Fire experts said there was an urgent need for a thorough electrical audit by a competent engineer, checking the current capacity, insulation, etc. “The number of casualties will not dip if superficial measures are taken. Changes have to be made in the law,” said former fire chief P D Kargupikar. He added that there was no proper scientific investigation conducted in the aftermath of a blaze. “Most evidence is destroyed while extinguishing the fire,” he said. “Spraying water further washes away the residue. In such circumstances, how does one prove if a short circuit sparked the blaze? Samples are sent to the state forensic science lab but no positive results are obtained,” said Kargupikar.

Fire department officials said despite repeated warnings, individuals and establishments do not invest in good quality electrical equipment. “Lack of maintenance of equipment could lead to fire-related accidents. Overload of electricity is another cause. A key reason is littering of ducts and dumping scrap in buildings, which provides easy ignition to fire. Many buildings don’t even have a proper refuge area or an escape route,” said an official.

Kargupikar said many people get rid off earth-leakage circuit-breakers (ELCB) as they may cause tripping too often. An ELCB is a safety device used in electrical installations to prevent electric shocks. It detects the smallest of stray voltages on the metal enclosures of electrical equipment and interrupts the circuit if dangerous voltage is detected. “Electrical wires have to be selected as per load. It is necessary to ensure they are ISI-certified and not sub-standard. Similarly, with a circuit-breaker, cost should not be a factor during installation,” added Kargupikar.

Chief fire officer P S Rahangdale said most fires here were due to electrical reasons. “Poor maintenance of wiring makes it vulnerable. Wiring gets oxidised due to exposure to weather. Most fatalities are due to inhalation of gas or smoke emitted after burning of wires and due to fear,” he said.

Five people – four employees and a former staff, were killed in a fire that broke out at a bar-cum-restaurant in the city early on Monday.  The five men were sleeping at the Kailash Bar and Restaurant, located on the ground floor of the four-storey Kumbaara Sangha building in Kalasipalya, when the fire broke out.  Although accommodation had been provided to the employees on the second floor, it was allegedly infested with bedbugs and so the five had chosen to sleep in the bar.

Of the five, police say three suffocated to death.  Fire brigade officials said the smoke had turned the bar into a gas chamber and the men had appeared to have made attempts to find the keys and open the rolling shutter door of the bar.

The other two had burn injuries and the cause of death will be known after autopsy.

It was not clear exactly when the fire, suspected to be caused by a short circuit, broke out.  Security guards of a building nearby noticed the fire and alerted police on night patrol at around 3.05 am.  By 3.10am, two fire tenders and a water bowser with 20 personnel were at the spot.

Another fire, this time studio in Kanjurmarg reduced to ashes

A blaze gutted a Kanjurmarg studio late on Saturday.

Shooting of five television serials was going on at the ground-plus-one Cinevista Studio when the fire broke out around 8pm. 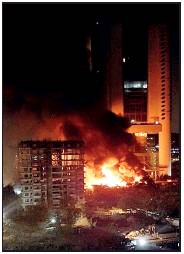 No one suffered burns in the incident. The fire department said it received a call at 8.07pm and fire engines reached the spot at 8.25pm. Eight engines were pressed into action soon after. The blaze was brought under control by 10.45pm, claimed fire brigade officials.

A person working at the studio said that there had been allegations of the place violating fire safety norms. The studio is located on LBS Marg and has a mix of permanent as well temporary sets.

Prima facie, the fire broke out due to a short-circuit in a generator, said a fire official. It engulfed 3,000 sqft area of the studio, he added. At least 180 people, including leading TV actors Harshad Chopra and Jennifer Winget, were working on various sets when the fire broke out. Luckily, it was a shoot break for all and not many were inside the studio. Whoever was inside managed to escape soon after noticing the fire which broke out on the ground floor, said the Parksite police. Chopra said that all were safe and declined to comment further.

A junior artist working on the sets of Anjali, a Marathi televison serial, told TOI that he noticed people running while he was on his way to the washroom. “People were rushing out from sets of Bepanaah, Haasil, Behad, Ek Deewana Tha and Anjali. The fire spread fast as the sets were made of wood,” he added.

A case of accident will be registered and a probe will be carried out, said senior inspector Vilas Jadhav.

A birthday bash at a pub in a central Mumbai building ended in a tragedy with the death of 14 people, including 11 women, in a blaze that broke out shortly after midnight. Most of the victims died of suffocation.

Fire officials said they received the first call at 12.27 a.m. and they rushed eight fire engines and fire tankers to the spot. The blaze was initially declared as a Level II fire but upgraded to Level III at 12.42 p.m. as the fire spread.

According to the fire control room, the fire was reported to have broken out at a restaurant called ‘1 Above’ located in Kamla Trade House.

The probe by Mumbai Police into the Kamala Mills fire tragedy has revealed that the fire might have caused due to a short circuit and the inflammable tarpaulin sheets used as sheds was responsible for spreading the blaze.

“The restro-bar had used tarpaulin sheets which are inflammable in nature. Minutes after the short circuit due to the tarpaulin sheets the entire outlet was engulfed in fire,” said an official who spoke on the condition of anonymity.