The entire collection at Delhi’s natural history museum has been destroyed in a fire, officials have confirmed. 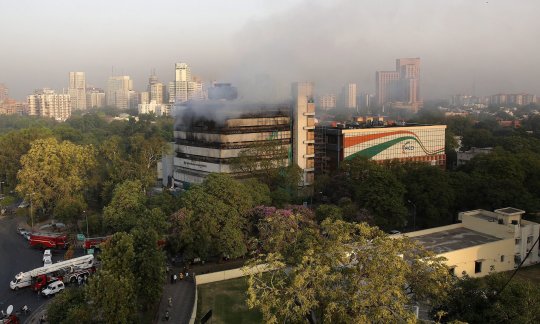 The blaze, which began sometime after 1.30am on Tuesday, burned through the upper part of the museum, where the museum’s collection was housed.

Firefighters were able to bring the flames under control before it reached the museum offices on the ground floor, mezzanine and first floor.

A spokesperson from Delhi’s fire service told the Guardian that the call was taken at about 2am, adding: “The museum was closed at the time so there were no casualties.”

“We are still not sure how the fire started but eyewitnesses say it started on the top of the building. The water system in the building was not working, and we had to arrange for water to be brought from a nearby metro station – that was the reason there was so much damage. If the water was working we could have saved a lot more of the building.”

Two firefighters were injured, but both have been released from hospital.

One of the highlights of the collection was an irreplaceable bone from a sauropod dinosaur, which was an estimated 160 million years old. It may have belonged to one of the largest animals to have walked the earth.

Rahul Khot, the curator of the Bombay Natural History Society’s collection, said: “This is an irreversible loss. Museums are not made up overnight; it takes effort over decades to collect, research and curate a museum.

Khot said it could take decades before a new collection for the museum was amassed again. “These are invaluable items. All museums have things which are very old, and very hard to put a monetary value on,” he said.

“This is a big loss for society and the nation. Many people use museums for education. It can’t be remade overnight.”

Plans to move the museum’s collection to a state-of-the-art facility were under way after a scathing report in 2012 by the government’s public accounts committee raised concerns about the maintenance of the museum.

A parliamentary panel had criticised the environment ministry for the “pathetic functioning” of the museum.

The minister of environment, who visited the remains of the museum on Tuesday morning, said: “I have asked for an energy and fire audit of all establishments of the ministry across the country.

“Plans will be made for how the museum is to be restored. First we have to assess the loss, then we can decide how to restore the museum.”

According to a spokesperson for the environment ministry, the building in which the collection was housed was managed by Ficci, a lobby group for Indian businesses.

Ficci and authorities at the natural history museum could not be reached for comment.

The museum, which was established in 1972, had a collection of preserved butterflies and reptiles, taxidermy, and a life-sized model of a dinosaur.

Short circuit sparks major fire in a building at Kozhikode