A three-storey commercial building in Chandigarh collapsed after it caught fire on Sunday. No casualties have been reported yet.

The fire fighters were trying to douse the fire when the building collapsed. A short circuit in the building is believed to be the cause of the fire.

The massive fire broke out at around 4.30 pm in a  commercial building which housed the government-run National Institute of Electronics and Information Technology (NIEIT) in Sector 17, commercial hub of the Chandigarh.

Around 14 to 20 fire tenders from Chandigarh, SAS Nagar and Panchkula were rushed to the spot.

At around 9.30 pm, the old building succumbed to the high temperate and collapsed, trapping three of the fire fighters at work under the debris.

“We are trying our best to get the trapped people out of the debris as human lives are always our top priority. The fire officials are also trying to make sure that the adjoining buildings are not affected by the fire,” said Mr Singh.

The fire is reported to be under control and the rescue operations to safely get the trapped men out are underway.

The very following day, a major fire was reported at the country’s leading clock manufacturing company ‘Ajanta’, located at the Morbi-Rajkot highway. 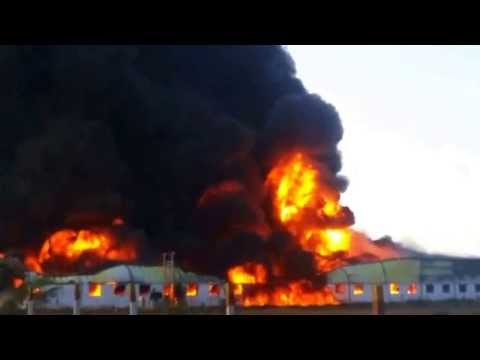 “A major fire broke out late last night at the Morbi-based clock manufacturing company ‘Ajanta’ near the Morbi-Rajkot highway, which was brought under control after eleven hours”, Chief Fire Officer of the Morbi fire brigade Girish Terraiya said, adding that nearly eight fire tenders were rushed to the spot to control the flame.

There was no report of any casuality, the fire brigade official confirmed. “The fire broke out at clock manufacturing company Ajanta’s second floor and spread rapidly to the third floor,” the company’s public relations officer Deepak Joshi said.

Raw materials used in manufacturing wall clocks were gutted in the fire, he said. Fire brigade sources said that the exact cause of the major fire in the company is yet to be ascertained.

However, company officials refused to comment about losses suffered by the company due to the fire.