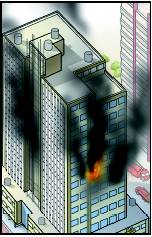 Source: The Times of India

Essential safety measures vital for the life, safety and health of occupants over a building’s lifetime. Thus the construction by-laws regulate to ensure adequate levels of fire safety and protection of people in a building or place of public entertainment.

It is important that all those with responsibilities in owning, managing and operating buildings – large or small – are fully aware of, and understand, their responsibilities of    safety measures in their buildings.

If buildings are ill-equipped to handle fires, many lives are lost. There are many fires which are repeated at the very same place twice and sometimes thrice. We must not forget the subsequent fires in Burrabazar, Kolkata. Still many buildings there do not have proper fire safety installation.

It seems Mumbai Mantralaya has not learned any lessons too from the past as far as fire safety of the secretariat building is concerned. Six months after a major fire broke out at the building, which claimed five lives, the public works department (PWD) is yet to implement the fire safety measures suggested by the fire brigade. (Source: DNA India)

Thus prosecuting high-rises for not following fire safety measures as mandated under the Fire Safety Act, 2006, enforced by the state government is a good measure well in advance.

Getting into their role, the government now intends to collect fire tax from all buildings as part of its new proposed legislation.

The government also plans to introduce punitive action for breach of the new law that anybody who fails to pay fire tax, along with municipal taxes, could be punished with minimum amount of Rs. 25,000. (as per TOI article dated 14.03.13)

Besides taxation, the new proposed law contemplates that the occupiers of buildings should be held responsible to maintain fire safety systems, or else they would be liable for prosecution. Disconnecting water and electricity connections is not the danger that owner or occupier faces in case of cancellation of fire NOC.

The proposed act may provide that such owner or occupier will not be able to occupy the building or premises on the ground of non-compliance of the fire safety measures.

To ensure the safety, liveability and sustainability of India’s built environment, High court has already issued notices to 21 highrises in Ahmedabad.

Fire at Brazil club kills more than 230 as partiers stampede toward exit, choke on toxic smoke

Comments on: "Buildings without proper fire safety installation in danger" (1)